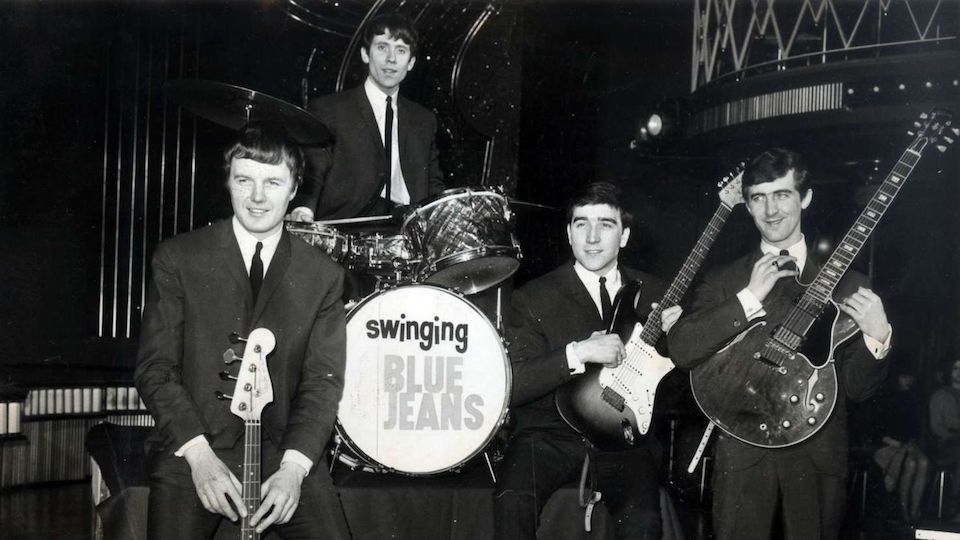 Remembered today for their 1964 hit “Hippy Hippy Shake,” which charted on both sides of the Atlantic — the Swinging Blue Jeans were one of the strongest of the Liverpool bands from the ’60s British Invasion; and, indeed, the Blue Jeans’ earliest incarnation goes back about as far as the roots of the Beatles as the Quarry Men. “Hippy Hippy Shake”, a cover of an obscure ’50s rocker was their only Top 30 entry in the U.S.. But the band enjoyed some other major and minor hits in the U.K., including a top-notch Merseyization of Betty Everett’s (and later Linda Ronstadt’s) “You’re No Good,” which they took into the British Top Five in 1964.

The group’s origins go back to 1957, when singer/guitarist Ray Ennis decided to form a band. The result was a skiffle sextet called “the Bluegenes”, the latter a misspelling of “blue jeans” that remained unchanged for a couple of years. The Bluegenes were heavily jazz influenced, and stayed away from trying to cover songs associated with Elvis Presley and other American rock & rollers, preferring instead to try and emulate the horn and sax parts that they heard on their guitars. The skiffle group lineup also included Bruce McCaskill on guitar and vocals, Tommy Hughes on banjo, Norman Kuhlke on washboard, and Spud Ward on oil drum bass. Ralph Ellis later joined on guitar, and Ward subsequently moved over to Rory Storm’s band, and eventually Les Braid took over the bassist spot. Hughes and McCaskill later left, the former for the army and the latter over personal disagreements, replaced by Johnny Carter and Paul Moss, respectively. By 1962, they were working full-time and playing the same venues in Liverpool as rival bands such as the Beatles, Gerry & the Pacemakers et al, and also performed for the first time at the Star Club in Hamburg late in the year.

Following this the band made a switch to rock & roll, trading in their acoustic instruments for their electric equivalents. And in that guise, a name change to the Swinging Blue Jeans, they not only won over German audiences but earned a coveted recording contract with EMI’s HMV imprint, under producer Walter J. Ridley. With the departure of banjo player Paul Moss soon after, they were left as a quartet comprised of Ray Ennis (rhythm guitar, vocals), Les Braid (bass, keyboards), Ralph Ellis (lead guitar), and Norman Kuhlke (drums). They made their recording debut — still as a quintet — with a Ray Ennis original, “It’s Too Late Now,” which made the British Top 30. Their second single, “Do You Know,” released in the fall of 1963, failed to sell, but in December of that year they broke through to stardom in with their rendition of “Hippy Hippy Shake.” They rode that record’s success all the way to the number two chart spot in England, right behind the Dave Clark Five’s “Glad All Over,” and earned a place on the first-ever broadcast of Top of the Pops in the bargain.

Their follow-up single, “Good Golly Miss Molly,” released in March of that year, charted in England at number 11. And “You’re No Good” followed two months later, and soared to number three in the U.K.. That string of successes led to their debut album called Blue Jeans A’ Swinging, issued in July of 1964.